In addition to the fantastic private terrace for guests the apartment has a roof terrace that is for community use but where it can be accessed if desired.

Attention to the guests:

Prior to your arrival we will contact you to recommend the easiest ways to get to the apartment according to whether you plan to come by car, train or plane. In case you requested it, we could send by e-mail a map with the route to arrive comfortably.

This is a house in which the owner for work reasons and has the services of the company Sevilla moving.

About us, we are Sevilla Moving and we will assist you for whatever you need.
If you want to do some activity in Seville or guided tours to nearby cities, do not hesitate to tell us about it. We want you to take the best taste of the city and where you go or do it is the best and most authentic.

We organize all kinds of activities and tours. Regular excursions to the main places of interest (Ronda, Granada, Córdoba) and other beautiful places less known near Seville that you can not miss. We also have bicycles for your stay, we can get you tickets for better flamenco shows, prepare a tasting of Iberian wines and products and take you on a route through the traditional or alternative Seville.

You can visit our site to know the prices and details of each activity.

As our guest, you will have a reduction in all the activities and excursions you book. In addition, we will advise you during check-in to make the most of your days in Seville.

Triana is located on the east bank of the river Guadalquivir alive and is separated from the old intramural area of the city by the river basin that runs its historic course.

The bridge of Triana that crosses the dock joins the center of the city.

According to mythology, the goddess Astarte, fleeing the amorous persecution of Hercules, mythological founder of the city of Seville, came to take refuge on the western bank of the Guadalquivir founding Triana.

The origin of his name has also aroused interest for researchers. Traditionally, it was linked to its past as a Roman colony founded by Trajan, the Italian-born emperor, Trajana-Triana. According to some authors, the name would come from a compromise formula between the Celtiberians and the Romans, tri, “three”, from the Roman and ana, “river”, of Celtiberian origin, since in that area the river was divided into three. This is what Justino Matute Gavira says in his work Apparatus to describe the history of Triana and its parish church.
The historical access road to Triana, from Seville, is through the one known as Puente de Triana, one of the hallmarks of the neighborhood. It was built by engineers Gustavo Steinacher and Ferdinand Bennetot. This iron construction replaced the primitive Barcas bridge. It was declared a National Historic Monument since 1976, after overcoming an attempt to demolish it.

Hillock
At the end of the Triana bridge, you reach the Altozano square, true center of reference of the neighborhood, historically it was the point where travelers from San Juan de Aznalfarache, Tomares and Castilleja de la Cuesta converged, before crossing the so-called bridge of boats, in the direction of Seville.

The current square is formed, above all, by architecture of the first quarter of the 20th century. Highlights include the Murillo Pharmacy building, built by the regionalist architect José Espiau and Muñoz between and the home of José Gómez Millán. The bullfighter Juan Belmonte’s sculpture, closely related to Triana, was also displayed in the same square and was inaugurated in 1972, the work of Venancio Blanco and another dedicated to Flamenco, commissioned to Jesús Gavira Alba in 1994.

In the square the current market of Triana opens, in whose low are the rest of the old Castle of San Jorge. This fortress was the seat of the Inquisition since 1481, although its initial construction from the Arab era dates back to 1171. In 1792, affected by the continuous abandonment and successive floods of the Guadalquivir, the complete demolition of the castle and the construction of a embankment that raised the level of the ground with a wide square that served as refuge in periods of floods. In execution of this project was granted by Royal Order in 1794 the passage of property from the crown to the city. Towards 1823 the market of Triana was demolished and settled in its lot. In 1990, the old market was demolished to build a more modern one, and in its construction came the remains of the castle and an Almohad cemetery. Archaeological and conservation work was carried out. The new market was inaugurated in June 2001.1 Following the market, you reach the Callejón de la Inquisición, located at the confluence of Castilla, San Jorge and Callao streets. It was for a century and a half the only visible testimony of the presence of the old inquisitorial tribunal in Triana.

Next to the bridge is the Carmen Chapel, designed by the architect Aníbal González, inaugurated in 1928 and containing an altarpiece of the Virgen del Carmen.

From the aforementioned square, the main historical roads of Triana are opened. In the Street San Jorge is the museum of the Ceramics, old factory of Ceramics Santa Ana, that has its origin in 1870. In the street Castile also is church of Our Lady of the O, soothes of the brotherhood of the same name, It is a temple built between the years.

In front of the bridge, the pedestrian street of San Jacinto begins, which is the old communication route with the Aljarafe, where the church of San Jacinto stands out, belonging to the old convent of San Jacinto, built in 1676 for the Order of the Dominicans. It was built by the architect Matías de Figueroa.

To the left, access to the Pureza street, where the church of Santa Ana stands out, this parish church dating from 1280, of Gothic-Mudejar style, is the oldest in Seville was founded by order of King Alfonso X. After the Lisbon Earthquake of 1755 was partially rebuilt. In the same street is the Chapel of the Sailors, was built in the twentieth century and is the headquarters of the Brotherhood of Hope of Triana.

Parallel to the river runs Betis Street, name that refers to the Latin name of the Guadalquivir River, and still retains some of the docks of the nineteenth century, known as footings, on the street is the House of the Columns, building dating from 1780 in the place occupied by the former University of Mareantes, institution responsible for the training of sailors for the crews departing to America, during the sixteenth and seventeenth centuries, the property occupies two floors and is structured around two courtyards, It has two facades, one main, of a neoclassical character with large Tuscan columns, to the street Pureza, and another of a secondary character to Betis street. For a time it became a neighborhood courtyard, currently housing a municipal civic center.

The best way to visit the city is on foot, by bike or by bus. We have available to the guests of bikes to rent with special price for our guests. To go to the airport, the most convenient bus is if there are few people or request the transfer service for 3 or 4 people. For more it is possible the transfer with van that is the most economical. 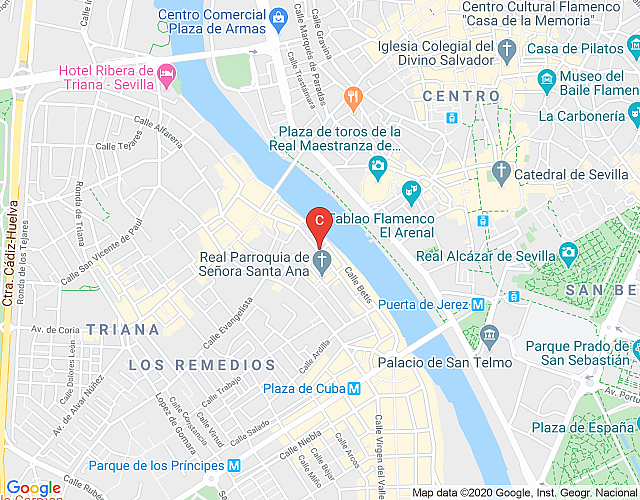